The Book of Judges describes a historical pattern that recurred after Joshua's conquest of Canaan before Israel had a king. Israel worships Canaan’s idols; God punishes them by having enemies attack; the Israelites return to God, who appoints a savior (a “judge”) to defeat the enemy; after peace is obtained, Israel returns to idolatry, and the cycle resumes. After many cycles, God declares (Jud. 10:11-14) that He will not save them from their enemies, bitingly telling them that their idols should save them. Nonetheless, Israel again abandons idolatry and cries to God, who relents and saves them. The Haftarah tells the beginning of this salvation, focusing on a southern section of the mountainous Gilead region, east of the Jordan River. (See Haftarah History and Geography, below.)

The Haftarah takes place after 300 years of Israelite possession of the area. Ammon had recently conquered it, pushing westward across the Jordan to conquer more Israelite territory; these attacks fulfilled God’s promise, above, not to save the Israelites. After eighteen years of Ammonite occupation, Gilead’s elders decide to fight for their land. To lead them, they turn to a native son, the warrior Yiftach, whom they had earlier banished from Gilead. They agree that he will become Gilead’s leader if he and his men defeat Ammon. Recounting the region’s history, Yiftach tells Ammon that their conquest is unjust since they had not contested the area’s Israelite rule in the centuries since Moses conquered it; even in Moses’s day, Moab’s king, Balak had not contested it. Ammon rejects Yiftach’s argument; Haftarah History and Geography presents a possible explanation for this rejection. Diplomacy having failed, Yiftach turns to God, vowing a human burnt offering to God if He grants him victory in battle. The Haftarah concludes with Yiftach’s divinely-inspired victory.

Verses 1-3: Born of a prostitute, Yiftach’s half-brothers wish to prevent him from inheriting a portion of their father’s property, and so banish him from Gilead. He flees to Tob where he leads a band of societal outcasts.

Gilead’s [legitimate] wife bore him [other] sons. The wife’s sons grew up, and they drove Yiftach out. They said to him, “You shall not inherit among our father’s household for you are the son of a different woman.”

Verses 4-6: Years later, as the Ammonites occupy Gilead, Gilead’s elders travel to Tob to ask Yiftach to drive the Ammonites from their territory.

They said to Yiftach, “Come and be our captain, that we may battle the Ammonites.”

Verses 7-11: Yiftach scorns their request because they had hatefully banished him from his father’s inheritance. The elders ignore this and repeat their requests. Yiftach requests leadership of all of Gilead if he defeats Ammon. Invoking God, the elders, and later their people, agree. Yiftach addresses God in Mitzpeh.

Yiftach said to the elders of Gilead, “If you bring me back home to fight against the children of ῾Ammon, and the Lord deliver them before me, shall I be your head?”

Verses 12-13: Yiftach asks Ammon’s king to justify their occupation of Gilead. The king replies that he seeks the peaceable return of their land which the Israelites had unjustly seized after the Exodus.

The king of the children of Ammon answered the messengers of Yiftah, Because Israel took away my land, when they came up out of Egypt, from Arnon as far as the Yabboq, and the Jordan: now, therefore, restore those lands again peaceably.

“Now, then: the Lord, God of Israel, dispossessed the Amorites before His people, Israel; [yet] you [Ammon] shall possess [their land]?!”

Verses 25-28: Yiftach also rejects Ammon’s claim by noting that centuries before, in Moses’s day, even Moab’s own king, Balak, had not contested the Israelites’ possession of the area as he battled them. Nor had Ammon claimed possession of these Israelite lands in the intervening 300 years. Ammon’s king rejects Yiftach’s arguments.

Are you [the present-day king of Ammon] any better than Balak son of Zippor, king of Moab [300 years ago]? Did he ever strive against Israel, or did he ever fight against them?

Verses 29-33: God inspires Yiftach, who travels to battle Ammon. He vows to offer as a burnt offering to God the first person who greets him upon his peaceful return home from battle.[1] God grants Yiftach great success in defeating Ammon (see Haftarah History and Geography) and driving them from Gilead.

Yiftah passed over to the children of Ammon to battle them: and the Lord delivered them into his hands. 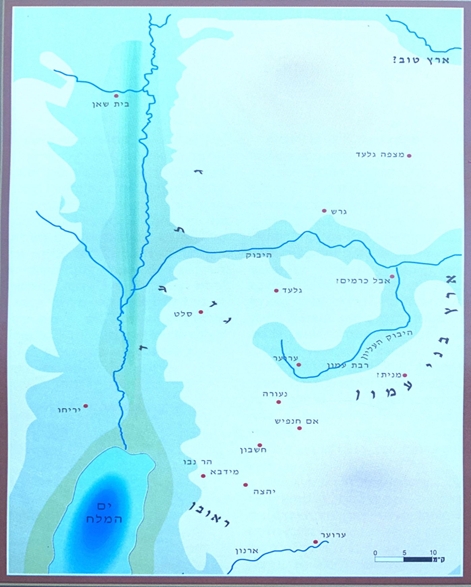 The Parashah (Num. 21:26) recounts that King Sichon’s Amorite tribes conquered this area from Moab. After Moses requested safe passage through the area, Sichon attacked the Israelites, who defeated the Amorites and took possession of the area (Num. 21:21-32).

The map shows that the tribe of Gad settled in the northern portion of the Amorite territory (i.e., Moab’s previous territory), south of the Jabbok River. Note the city of Gilead Yiftach’s place of birth; his father was also named Gilead. (These two usages of “Gilead”- as names of a city and of a person- are in addition to its naming an entire region.) The tribe of Reuben settled to their south.

Ammon was Moab’s historical, powerful ally to its east; its territory is on the map’s right. The Parashah states (ibid, v. 24) that the Israelites did not cross Ammon’s fortified border; this was in keeping with God’s command (Deut. 2:19, 36).

Nonetheless, Joshua 13:24 includes “half of Ammon” among the land Moses gave to the tribe of Gad. According to this, Ammon’s King may have rejected Yiftach’s historical account because Gad had indeed been dwelling for centuries in Ammonite territory.

In the map’s upper right corner is a possible location of Tob. Yiftach fled there after being chased from his father’s household in the city of Gilead. Gilead’s elders traveled to him there to ask him to lead the battle against Ammon. The Gileadites then publicly proclaimed Yiftach as their commander, promising him future leadership of all of Gilead if he leads them to victory. In Mitzpeh Gilead between Tob and the city of Gilead, Yiftach addresses God.

The map marks low altitudes, such as the Dead Sea, with dark colors, and higher altitudes with lighter colors. It is reproduced from the Atlas Da’at Mikra, with kind permission from its publisher, Mossad HaRav Kook-Jerusalem.

[1] The haftarah omits the story of whether or how this improper vow was subsequently fulfilled.