Why Do We Read Different Parshas?

This year, we have a situation that arises every so often – certainly not infrequently! In America, Europe, Australia, South Africa – basically, most of the world – the eighth and final day of Pesach falls on a Shabbos. But in Israel, where Pesach is only seven days long, the last day of the holiday is Friday. The next day is a regular, non-yom tov Shabbos (or “Shabbat,” as most people there would say). This creates the following discrepancy: in Israel, they read parshas Acharei Mos on the Shabbos that to them is the day after Pesach. In the rest of the world, where Shabbos is still observed as Pesach, we read the special portion for yom tov. 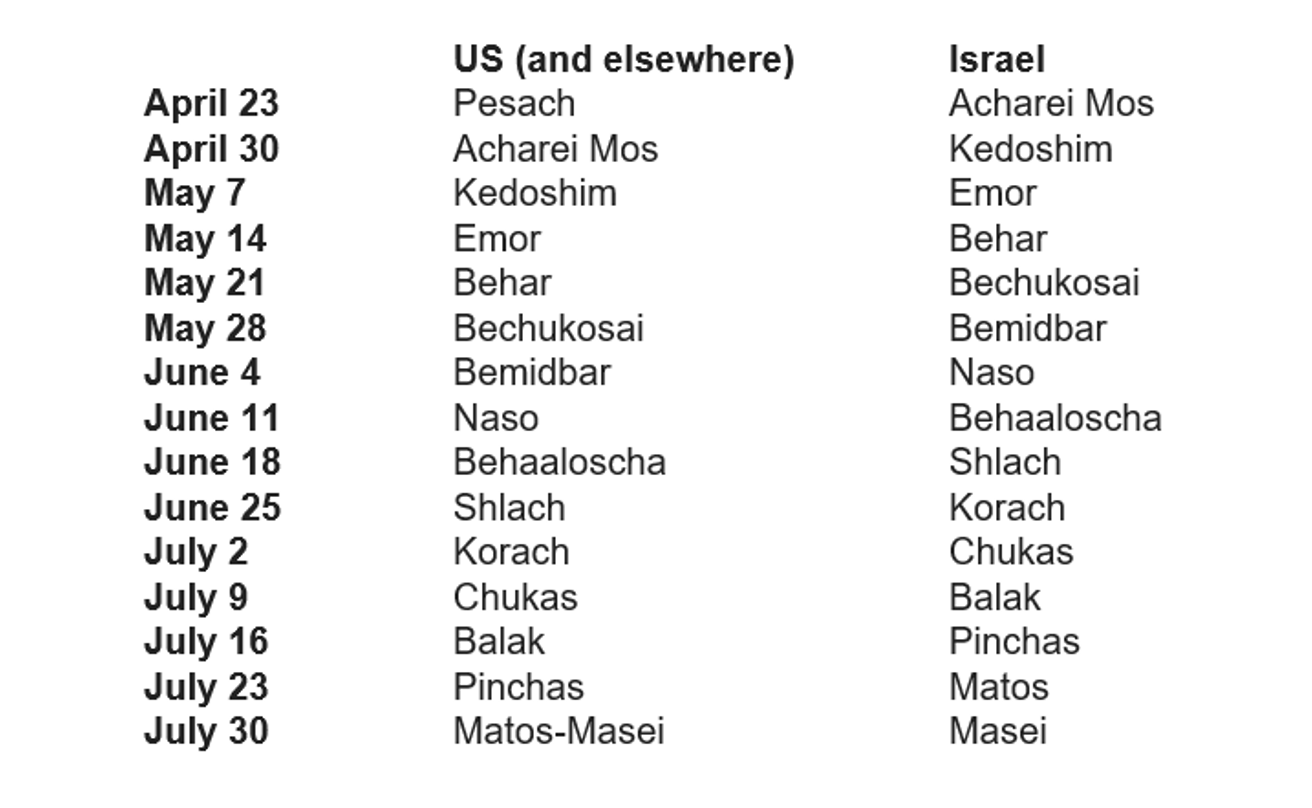 Fifteen weeks! Three and a half months!

Because this is a leap year (i.e., a year with an extra month of Adar), we may be looking at the maximum number of weeks possible for a discrepancy between Israel and elsewhere but in other years, the difference may be even more pronounced. If the sedras of Acharei Mos-Kedoshim, Behar-Bechukosai and Chukas-Balak were joined, as they are in most years, we might have three fewer weeks of discrepancy but an even bigger question arises: Why wait so long to re-synchronize the calendar when all we need to do is for Israel to split a double parsha?

The question is largely based on the assumption that having everybody read the same Torah portion at the same time should be the overriding concern. Before we address that assumption, let’s look at why we read the Torah the way we do.

The Rules of the Torah-Reading Schedule

Historically, the Torah was not always divided the way we read it today. Our current system was designed by the Geonim in Bavel (Babylonia) but for centuries, the triennial (three-year) cycle was popular in Israel. It is therefore not unheard of for different communities to not all be reading the same Torah portion at the same time. (It appears that things started to coalesce in the 14th century.) Nevertheless, there were always certain principles, such as that the portions of the curses in sefer Vayikra (meaning parshas Bechukosai) and in sefer Devarim (meaning parshas Ki Savo) should be read before Shavuos and Rosh Hashana, respectively; this practice is attributed to the Biblical Ezra (Megillah 31b – Tosfos there adds that parshas Bemidbar should also be read before Shavuos so that the curses in Bechukosai aren’t too close to Shavuos).

The Shulchan Aruch (OC 428:4) lays out four rules, which serve as the basis for why certain sedras may or may not be joined:

(1) The Shabbos before Pesach must be parshas Tzav in a regular year or parshas Metzora in a leap year, unless Rosh Hashana was on a Thursday, in which case it’s parshas Acharei Mos. This necessitates joining Vayakhel-Pekudei into a single parsha in most years;

(2) The Shabbos before Shavuos is parshas Bemidbar, as we have discussed. (In a leap year in which Rosh Hashana was on Thursday, it is parshas Naso.) Because of this, three sets of parshiyos in sefer Vayikra are combined in a regular (non-leap) year: Tazria-Metzora, Acharei Mos-Kedoshim and Behar-Bechukosai. (In regular years when Pesach starts on Shabbos, Behar and Bechukosai are read separately in Israel because 22 Nisan is a regular Shabbos there);

(3) Parshas Vaeschanan is read on the Shabbos after Tisha b’Av. Because of this, the parshiyos of Matos and Masei need to be combined except in leap years in which Rosh Hashana fell on Thursday or in Israel in leap years when Pesach starts on Shabbos (as is the case this year – 5779). Outside of Israel, when Shavuos falls on Friday (so that Shabbos is the second day), Chukas and Balak must also be read together;

We go into things with these four basic ground rules in place, but there are other factors to consider.

Why Don’t We Adjust Sooner?

As noted, the simple solution in most years would be for Israel to spilt a double parsha, which would cause them to realign with the rest of the world. The reason we don’t do this is explained by Rav Yissachar ben Mordechai ibn Sussan (15th century). In Tikkun Yissachar, he writes that Israel is following the predominant custom, which is presumably based on the Torah’s ideal that Pesach should be observed for seven days. It would be unseemly for the residents of Israel to tweak their practice to align with the rest of the world, whose Torah-reading schedule is “off” out of necessity, thanks to the addition of an eighth day of Pesach. And so, in Israel, they wait until the last possible juncture to combine sedras. (We’ll explain why in a moment.)

Because this year (5782) is a leap year, there are no double parshas for Israel to split, but the question still arises: why don’t the rest of us “double up” two sedras earlier, in order to catch up with Israel?

There are a number of factors. For one thing, in a leap year, combining Matos-Masei is the normal thing to do. If we combined an earlier sedra, we’d have to separate Matos and Masei, which goes against our “standard operating procedure.” (See Maharit.) But why are we so keen – both in Israel and elsewhere, to delay combining parshas to the last possible opportunity?

It seems that the appropriate course of action when doubling-up two sedras is to wait for the latest opportunity to do so. This could either be because people historically waited to combine parshas until they saw that they were going to have a problem meeting one of the four “checkpoints” described above, or simply in order to make it evident that they were “doubling up” Torah readings in order to meet one of these checkpoints.

While people might acknowledge the necessity inherent in the former hypothesis, I question its historicity, since we’ve been working with standardized calendars for far longer than we’ve had a standardized Torah-reading schedule; I therefore tend to favor the latter hypothesis. People may find it a less compelling reason but I think the logic underlying it makes perfect sense. Consider: We add an extra month of Adar to our calendar every so often in order to ensure that the following month – Nisan, in which Pesach occurs – falls in the spring. Doing it this way was a necessity in Sanhedrin times, when the calendar was set month by month, based on the testimony of witnesses. Nowadays, however, we have a calendar that will last us to eternity. We could just as easily accomplish our goal by inserting an extra Kislev or an extra Shevat. Nevertheless, we only insert an extra Adar since the additional month is only declared for the sake of the month that follows it. Similarly, I can see the logic of doubling up two Torah readings at the juncture closest to the point that actually necessitates such a change.

It’s apparent that this issue has presented a halachic quandary for more than a millennium but it has really only become a point of contention for some people in the few decades, based on increasingly-common transit between Israel and diaspora communities. Being in a country reading the “wrong” parsha for one’s own schedule creates the inconvenience of trying to find a minyan reading the sedra of one’s homeland (probably easier for an American, European or Australian in Israel than vice versa) or trying somehow to “fix” things upon one’s return home.

Obviously, if one is in a place with a lot of one’s own countrymen, such as an English-speaking yeshiva in Israel or some kind of vacation resort, by all means one may read the sedra that the visiting congregation is up to even if it’s not the one being read throughout the country they’re visiting. It must be noted, however that one is not obligated to find such a minyan. Reading the Torah is a communal obligation, not an individual obligation. An individual fulfills his personal obligation through the communal reading even if it’s not the one he would have heard at home. (Yom Tov Sheini Kehilchaso 9:13-17 cites Rav Moshe Feinstein, Rav Shlomo Zalman Auerbach, Rav Shach and Rav Elyashiv on this matter.)

Nevertheless, some people seem to feel quite strongly that the ubiquity of travel between Israel and elsewhere warrants a change. I, personally, believe that such a demand may be missing the point of the enactment. The Geonim and Rishonim appear to have put a lot of thought into the matter of our Torah readings but the number of travelers between Israel and elsewhere does not appear to have been a major factor in the decision-making process. There have always been travelers between Israel and the diaspora. Even today, the number of travelers affected by this discrepancy represents a tiny minority of world Jewry. It just happens to be a somewhat larger tiny minority than in previous generations.

But What About Unity?

As far as the concept of “Jewish unity” – the idea that we should inherently all be reading the same parsha as much as possible – that’s a nice ideal but it’s not the driving force in this matter. Yes, Jewish unity is an important concept. This is stressed throughout our literature, from the idea that we camped at Sinai k’ish echad b’lev echad (like a single person with a unified purpose – Rashi on Exodus 19:2, citing the Mechilta d’Rabbi Yishmael) to the principle that kol Yisroel areivim zeh bazeh (all Jews are interconnected – Talmud Shevuos 39a. And no, that wasn’t a typo – “zeh bazeh” has a different nuance in meaning than the more familiar “zeh lazeh,” which occurs elsewhere). Jewish unity is important but it’s not the sole driving force in halacha.

Consider if you will the holiday of Purim, which occurred close to the end of the Biblical period. The Sages instituted that Purim be observed on 14 Adar. Unless one is in a city that was walled since the time of Joshua – in that case, one observes Purim on 15 Adar. And it doesn’t stop there! Take a look at the first two mishnayos in tractate Megillah: there were small villages where residents would only assemble in shuls on Mondays and Thursdays. In such villages, if 14 Adar didn’t fall on one of those days, they would observe Purim on the closest preceding Monday or Thursday. Accordingly, some people might read the megillah on 11, 12 or 13 Adar, while others read it on 14 Adar and still others read it on 15 Adar! Didn’t Chazal understand the importance of Jewish unity?

Of course they did. But they also understood that unity doesn’t mean being in lockstep. We all celebrate Purim in mid-Adar but the needs of different communities may affect exactly when that is. It may be inconvenient for a person if he’s in Jerusalem on 14 Adar and in Tel Aviv on 15 Adar – neither of which is observed as Purim – but we’re not about to change the practice because of such commuters.

The same is true of our Torah-reading schedule. All of Jewry now observes the one-year cycle, and we are sure to re-align at four points in the year, as detailed above. In between those points, however, there’s “wiggle room” that enables different communities to meet different halachic needs. Yes, there are some world travelers who may be inconvenienced by the differences between Israel and elsewhere but, as with those who commute in and out of Jerusalem in Adar, the onus is on the individual to adjust to the community, not vice versa.

The fact that we may sometimes read different sedras for weeks - or even for months - is a celebration of our individuality. The fact that we always make sure to re-align is a sign of our unity.

Rabbi Jack Abramowitz is Torah Content Editor at the Orthodox Union. He is the author of seven books, including The Tzniyus Book, The Taryag Companion and The God Book. His latest work, Ask Rabbi Jack, is available from Kodesh Press as well as on Amazon.