At God’s command, Jeremiah stands at the Temple gate, delivering blistering, confrontational messages to its visitors about every sector of Judean society. His fiery, mocking speeches, found in chapters 7-10 of his book, include rebukes, calls to repentance, promises of God’s reward and punishment, and more. Jeremiah reminds the people that God destroyed Shilo, the Tabernacle’s home for centuries, due to their sins. Lamenting Judah’s coming destruction, he recounts its spiritual failures, including widespread idolatry and false trust in the Temple’s invincibility. He also attacks its moral and societal injustices, including child sacrifice, murder, adultery, oppressing society’s vulnerable, lying, and corrupt leadership.

The Haftarah states that the Sinaitic covenant requires God’s people to obey all His commands. Since then, Jeremiah declares, the generations have declined. They also rejected generations of prophets God sent to improve them. Yet despite their depravities, the people still sacrifice to God at the Temple, seemingly following the laws of Parashiot Vayikra and Tzav. Jeremiah blasts these offerings as worthless without observance of the entire covenant.

Judeans worshipped idols throughout Judah and in the Temple, even practicing child sacrifice in the nearby Ben Hinnom Valley. God will punish the people and turn these idolatrous sites into fields of slaughter and overflowing mass graves. Later, the bones of Judah’s idolatrous leadership and Jerusalem’s residents will be exhumed, eventually to rot. As is customary, the Haftarah concludes on a positive note , stating that the true service and knowledge of God consists of pursuing kindness, righteousness and justice.

Verses 7:21-22: The people think that sacrifices at the Temple, on their own, protect them. Jeremiah declares that such sacrifices are worthless, exaggeratingly stating that God never commanded them at all.

For I [God] did not speak to your fathers, nor command them on the day I brought them out of the land of Egypt, regarding matters of a burnt offering or a sacrifice [that is eaten].

Verse 7:23: Overall obedience to God is the foundation of the Sinai covenant, and what God truly commanded.

But this thing I commanded them, saying, “Obey My voice, and I will be your God, and you shall be My people: walk in all the ways that I have commanded you, that it may be well with you.”

Verses 7:24-28: Since the Exodus, the people have not obeyed God’s word, with each generation being worse than its predecessor. For generations, they have rejected God’s constant stream of prophets, and will reject Jeremiah, too.

They did not hearken, nor incline their ear. They walked in the counsels [and] imaginations of their evil heart, and went backward, and not forward.

Verses 7:29-31: Due to God’s rejection of His people, Jeremiah calls for lamentation upon the hills where Judah worshipped idols. The people also erected idols in the Temple and sacrificed children in the Ben Hinnom Valley.

They have built high places of Tofet that are in the Valley of Ben-hinnom, to burn their sons and their daughters in fire, which I did not command, nor did it arise in My heart.

Verses 7:32-34: Ben Hinnom Valley will become known as a mass grave for God’s mass slaughter of idolatrous Judeans. After the graves are filled, birds of prey will consume the corpses. Joy will cease in Judah.

Verses 8:1-3: Further, invaders will exhume the bones of Judah’s idolatrous leaders and Jerusalem’s residents, and leave them unburied until they rot. The fate of the few survivors will be even worse than the dead.

Verses 9:22-23: Aside from knowing God and acting accordingly, nothing else is worthwhile.

“But let the one who glories, glory in this- that he understands and knows Me, for I am the Lord Who practices kindness, justice and righteousness on the earth, for in these do I delight”, declares the Lord.

The Talmud relates Jeremiah’s criticism of child sacrifice (7:31, above) to other instances of actual (or near) human sacrifice in the Bible.

“Which I [God] did not command” [refers to] the son of Mesha, king of Moab, as (II Kings 3:27) states: “[King Mesha] took his firstborn son, who would reign after him, and offered him as a burnt-offering.”...

“Nor did it arise in My heart,” refers to Isaac, son of Abraham. 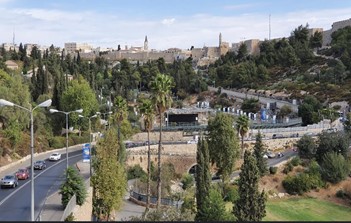 The Valley of Ben Hinnom (or Gei Ben Hinnom) is central to the Haftarah. The Talmud uses its name, Gehinnom, to describe a place of punishment after death. Located outside the Old City of Jerusalem, and just south of Mount Zion the Valley can be seen on the map (Jerusalem’s outline is black). 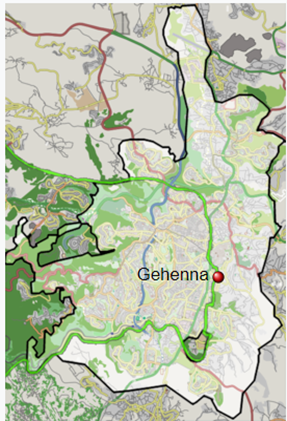 The photograph shows its recent appearance. Located in and around the valley is a public park and the Menachem Begin Heritage Center.

In 1975, Gabriel Barkay discovered the Ketef Hinnom burial caves, shown below, from the First Temple period, under St. Andrews Church. The Talmud (Sanhedrin 96b) connects burial caves in the area to their inhabitant’s ultimate fate, described in verses 8:1-3.

The caves contained the oldest Biblical text ever discovered, a pair of silver scrolls containing the text of the Priestly Blessing (Num. 6:24-26); see images below right. 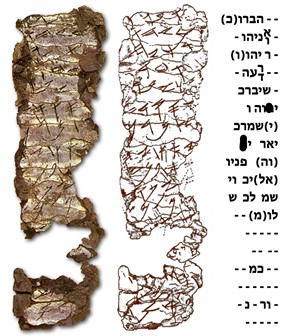 With emendations, all translations are from Sefaria.org. All images from Wikimedia. To dedicate, comment, or subscribe, email haftarahhelper@gmail.com.