After a tumultuous half millennium, the Israelite kingdom was finally prosperous and at peace under its king, Solomon. Succeeding his father, David, he solidified his rule, was blessed with divine wisdom during a prophetic encounter, organized the nation within, and struck alliances with neighbors. Solomon starts to fulfill David’s greatest desire: to build a permanent House for God, as commanded in the Parashah. Continuing David’s alliance with King Hiram of Tyre to the north, Solomon contracts for Hiram’s skilled lumbermen to work with Israelites to cut and transport massive trees from “the Lebanon” to the sea for transport to Israel’s Mediterranean coast.

The Haftarah begins by relating how Solomon’s divine wisdom, like Bezalel’s divine wisdom in building the Mishkan (Tabernacle), guides his work. In the spring of his fourth year as king, Solomon musters a massive workforce- more than 180,000 men- to transport materials from across Israel and beyond. He covered the Temple in fine stones, high-quality wood, and precious metals. As in the Parashah, the Temple’s size, campus, features, and materials are meticulously detailed. The Haftarah concludes as God enjoins Solomon to follow His laws. In turn, God will fulfill His promises to David, sustain the monarchy, and protect and, as stated in the Parashah, dwell among His people.

Verses 5:26-28: Solomon sends Israelite men to “the Lebanon” to work with Hiram’s lumbermen.

Verses 5:29-32: Solomon sends 150,000 other workers, along with 3,300 supervisors to enforce their work, to the mountains to quarry and transport large, valuable stones. His, Hiram’s and other workers hew them for the Temple.

The king commanded, and they transported great stones, costly stones- to lay the foundation of the House with hewn stones.

Verses 6:1-6: 480 years after the Exodus and four years into his reign, Solomon builds the Temple. The dimensions and windows of its main building are detailed, as are the dimensions of its interior and exterior walls.

The House which King Solomon built for the Lord – its length was sixty cubits, its breadth was twenty cubits, and its height was thirty cubits.

Verses 6:7-10: Expanding on the prohibition to use hewn stone for an Altar (Ex. 20:22), Solomon built his Temple of materials fashioned elsewhere. Additional building dimensions and the use of cedar wood are described.

Verses 6:11-13: God tells Solomon that if he follows God’s ways, He will fulfill His promises to David, sustain the monarchy, and protect and dwell among His people.

[Regarding] this House you are building: If you follow My laws, perform my judgments, and keep all My commandments, walking in [their ways, then] I will fulfill for you the word [i.e., promise] that I spoke unto your father, David.

As did the Mishkan before it, the Temple’s construction fulfilled the command, “Let them make Me a sanctuary that I may dwell among them.” (Exodus 25:8) In both cases, this command is elaborated with great detail, including building dimensions, materials, building methods, and more. The first image below is one presentation (a side view and a top view) of the building’s main features and dimensions. Other presentations differ in various ways, given uncertainties in the Biblical text.

Solomon’s Temple has captured the imaginations of countless Jews and non-Jews over the millennia. The second image below, for example, is its depiction, with accompanying notes, by famed mathematician and scientist, Isaac Newton. His extensive writings about Solomon’s Temple are stored at the National Library of Israel. 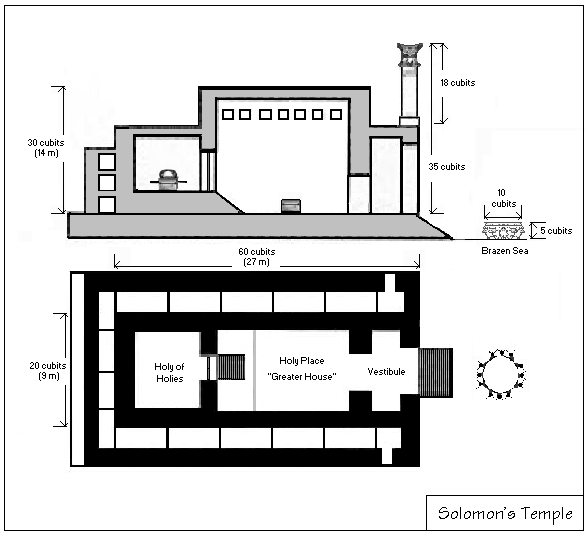 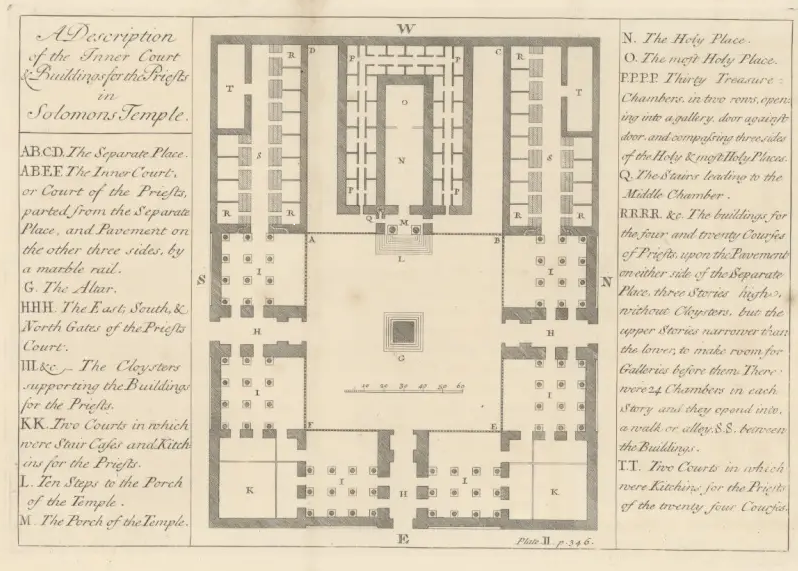 With emendations, all translations are from Sefaria.org.  All images under Creative Commons license.  To dedicate, comment, or subscribe, email haftarahhelper@gmail.com.