Under the reigns of the wicked and idolatrous King Ahab, his Phoenician wife, Jezebel, and their successors, two prominent prophets arose: Elijah and his primary disciple, Elisha. Traveling across the powerful and prosperous Northern Kingdom, they performed acts of justice in the face of societal injustice and miracles in the face of mass idol worship, taught ordinary people to serve God, and inspired schools of prophetic disciples. Like Abraham, they stood alone against their surrounding society.

The Haftarah presents three of Elisha’s many miracles. The first is for an exceedingly poor widow of a prophetic disciple; her sole possession is a jug of oil. Like Sodom’s neglect of its poor and contrary to Abraham’s righteous path in the Parashah and Torah law, her neighbors accept her creditors’ seizure of her sons to pay off her debts. Elisha miraculously multiplies her bit of oil so she can pay her debts, save her sons, and sustain her family.

Elisha’s other miracles in the Haftarah are for another God-fearing woman, this one at society’s apex. Welcoming travelers as Abraham and Lot do in the Parashah, she hosts Elisha on his periodic visits to her city, Shunem, eventually building him a private loft. With words nearly identical to those used in the Parashah by Abraham’s visitors when promising Sarah a son, Elisha promises the barren Shunammite with an elderly husband that she will miraculously bear a son. Years later, her son dies - a fate worse than Isaac’s near-death at his binding in the Parashah. The Haftarah closes with a third miracle as Elisha revives the dead boy.

Verses 1-7: Elisha saves a disciple’s widow and her sons with a miraculous amount of oil to alleviate her debts.

She came and told the man of God. He said, “Go, sell the oil, pay your debt; you and your children will live off the remainder."

Verses 8-10: During his local visits, a prominent Shunammite woman provides Elisha with room and board...

Let us now make a little upper chamber with walls. We will place for him there a bed, a table, a chair, a lamp so when he comes to us, he shall turn in there.

Verses 11-17: … and in return, Elisha promises her and her elderly husband a son.

[Elisha] said, “About this time in the coming year, you shall embrace a son." She said, "My lord, O man of God, do not fail your maidservant."

Verses 18-23: Tragically, the boy dies while working in the field. His mother pleads for Elisha to save him.

[His father’s servant] carried [the boy], bringing him to his mother. He sat on her knees till noon, and died.

Gehazi had traveled before them. He laid [Elisha’s] staff on the child’s face, but there was neither voice nor sound. [Gehazi] turned back to meet [Elisha], telling him, “The child is not awakened.”

[Elisha] repeatedly walked about the house to and fro. He arose and stretched himself upon [the child]. The child sneezed seven times, and the child opened his eyes.

The biblical city of Shunem is generally identified with the modern city of Sulam. The Bible mentions it many times. King Saul fought his last battle there, and King David’s handmaiden, Avishag, came from there. The Egyptian Armana letters, pictured below, also refer to it. 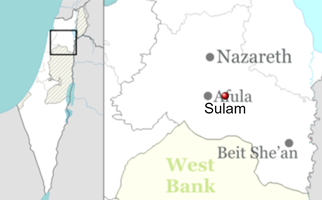 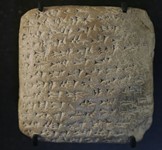 (Images from Wikimedia under Creative Commons License. All images are property of their creators.)

The Shunammite woman’s actions in the Haftarah are the source of the obligation to visit one’s teacher on holidays.

Rabbi Yitzḥak said: “One is obligated to greet his teacher on a Festival, as [II Kings 4:23] states, ’Why will you go to him today; it is neither the New Moon nor a day of rest?’ ” - implying that on the New Moon and on a day of rest, she is required to go.